The Pub at Lucaya is a restaurant/bar that gives onto Count Basie Square, at the center of Port Lucaya marketplace.  It was formerly known as Pusser's Pub, named after the eponymous brand of rum.  It's a great place to relax, gossip, people-watch, and, of course, DRINK!  We stumbled upon it after dinner on on our first night (sober stumbling, that!), and enjoyed it so much, we refused to relinquish our barstools for the entire evening.  That was a wise decision, as after sundown, the place got packed!

Befriended by the gregarious team of bartenders (McGyver, Quincy, Danyel & Kyle), and loads of friendly patrons, we sampled the bar's various offerings, from the infamous "Pusser's Painkillers," to test-tube shots of Goldschlager (yuck) and Jagermeister (yucker), which we cheerily declined and let the bartenders drink for us! 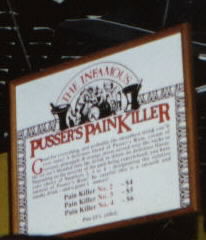 Needless to say, the wild mixture of libations, combined with our being a tad out of practice, left us with aching heads the next morning.  Fortunately, Em had planned a quiet day at the pool, but overambitious Renée had scheduled a 9:15am bus tour!  I am proud to say I made it, and actually enjoyed the experience! (tho I did skip the complimentary late-morning rum-tasting...)

Swearing not to return to the scene that had caused our hangovers, what did we do as we got off the boat cruise 2 days later?  Why, we stopped by for a Bahama-Mama, of course!  We knew it was getting bad when Em started modeling stolen hats woven out of palm: 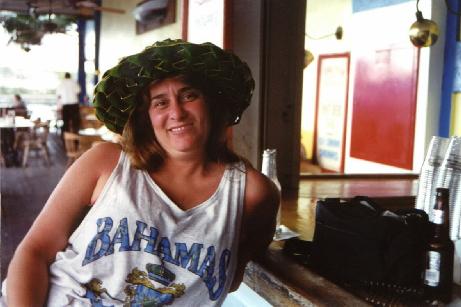 As night fell, people got even sillier - here's Em clowning with a guy named John and his sumo-wrestler-looking sidekick! 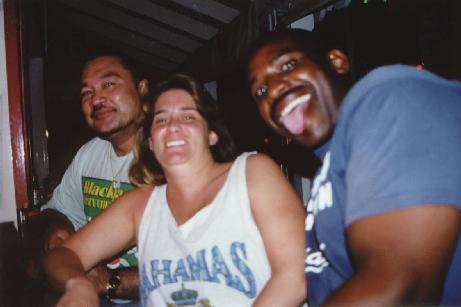 Not to be left out of the fun, Quincy the bartender stuck his tongue into the picture! 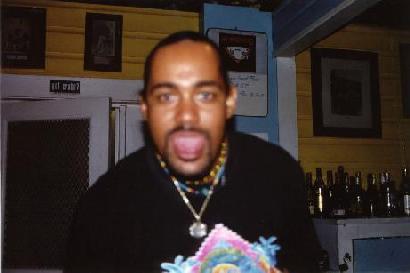 And me?  When I had to hang on to John & my barstool for dear life, Em & I decided it was time to go! 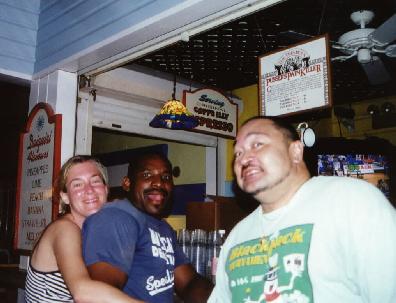 Once safely ensconced in our hotel-room-haven (around 7:30pm!), we took to our beds, dinner being out of the question!!  The worst shower I ever took is the one I suffered 2 hours later, getting ready to go out dancing!  I pulled it off, but let's just say that no more rum was consumed that evening!

And did we go back after that???  But of course!  We'd learned our lesson, though.  The next night we stuck to beer!

BACK to Bahamas homepage

This page designed by Renée
Last edited on March 17, 2000